Phil arrived in Newcastle at 12:30, and we headed towards Taree with Port Macquarie as our main target for the day. In the Taree area there seemed to be a weak storm to the west...but as we entered town and grabbed lunch it started dropping some nice CG's! After a quick radar update (thankyou AC-on-the-road) we thought we'd stay in Taree and watch things to the NW with a corepunch in mind as it neared the coast (orange/red on radar).

Setting ourselves up just north of town on the river flats gave us a great view of pretty much 360 degrees - a rarity on the MNC! Here we observed an interesting roll cloud which stretched from our west (in the pic below) all the way around to the NE horizon! Perhaps this was the boundary of the weak SE change pushing up the coast.

After a small core punch driving north in Coopernook (got the southern edge of the storm with some very heavy rain and a bit of flash flooding!), we decided to push on to Port Macquarie, which we believed was going to be the best mix of shear and instability at 6z for how far we could drive! On the way there i recieved an SMS from my brother at Uni of New England in Armidale, that they had 3cm hail!

The bad news when we arrived at the clearing just short of the Hastings River was that there were storms to our south west (weak stuff near Gloucester) and north (the monsters near Coffs/Grafton)...but nothing that was around or looking like developing soon! So a phone call to Shane Watson (thanks mate!) informed us that we should head back towards Taree, as there were still cells being generated all the time in the Upper Manning and we might get lucky down there! So an hour and a half after the photos above, we arrived back in Taree, with another roll cloud again - these photos taken 1km north of where I took the same ones earlier!

The storm from earlier doing its thing over the ocean:

Storm near the Armidale area:

After this we drove along the Taree bypass with a plan to head west and get amongst some of the strong echoes that had been around there for the past few hours.

But on the way we bumped into an obstacle...in the form of the law! The Police were parked at the bottom of the huge hill at the northern Forster turnoff, thought they had me for doing 17 over the limit! The first question I was asked was "are you a green P plate driver?" It was then that it dawned on me that I'd forgotten to take off Phil's green P plates when I started driving! So naturally I showed him my full licence and he immediately said "well I'm not interested in booking you for 7 over" so off we went! Smart buggers still can't catch me out at the bottom of a huge hill!

About 1km north of Nabiac, Phil started sounding quite excited and quickly grabbed my camera and shot a photo of this Cb out the window (you can see the reflection of the trusty old A80 in the right side of the photo too ):

At the Ampol where you turn right to head to Gloucester...I jumped out of the car and grabbed this photo of the developing mammatus to our NW:

So we continued with our driving to the west to get a better view of the mammatus, and we got a view about 2km west of Nabiac. Though the focus was on the mammatus when I jumped out of the car...this little updraft complex took my interest before I even considered taking photos of the above!

In those two mins most of the mid level cloud had cleared and gave us a magnificent view of the best mammatus I had seen since December 21, 2001!!!

Again, I turned around and grabbed a photo of this on the southern side of the road of this now beautiful updraft which was rotating nicely in the mid levels! (probably courtesy of the 30-35kt NW winds at 700hPa!) 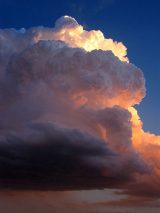 Which then developed into this soon after - with occasional CC flickers in the cloud: 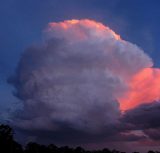 We headed to the coast after this for a lightning show...but unfortunately it was pretty average and I had another one of my unlucky nights! (ie: NO decent CG's or crawlers!)

Well what a day! By mid-late afternoon it looked like a 'half-bust' in the sense that we hadn't seen anything too exciting considering the atmospheric setup. But as Dave Ellem and I discussed last night...everything seemed to go berko after 5pm!

Check out Jimmy Deguara's chase report for this date.