September 29th 1996 will be a date long remembered by residents of the New South Wales Northern Tablelands city of Armidale.

It started out as a fairly normal spring day - a thin veil of cloud covering the sky in the morning, winds were light north-westerlies, and humidity was high. The stage was set for the most spectacular and destructive weather event to strike Armidale in living memory.

By lunch time the sky became darker with cumulonimbus clouds building in the west, and the familiar but ominous sound of rumbling thunder was heard in the distance. A storm arrived just before 2pm with rain and small hailstones - around 10 millimetres diameter. The rain stopped at 2.30pm but thunder continued to rumble intermittently.

Then at 3pm it approached from the south-west - a dark menacing cloud with an unusual colour. Many said later that it appeared orange or pink which may have been caused by excessive dust in the cloud. The thunder increased and light rain started falling. Many residents were indoors watching the Rugby League Grand Final, no one had any idea of what was about to happen. There had been no severe storm warning.

What was actually happening was a huge cumulonimbus storm cloud or a supercell was building to the west of Armidale. Inside this cloud massive updraughts were sweeping tiny particles of dust and ice up into the higher reaches were supercooled droplets of water were waiting to freeze onto them upon impact creating small hailstones. These hailstones were then falling to the lower levels before again being caught in the updraughts. After making many trips up and down in the giant cloud the hailstones had become bigger than golf balls too heavy to remain aloft, and started plummetting to the ground. Unfortunately Armidale was directly below the cloud at this stage.

At 3.23pm the first of the hailstones fell on the city. At this stage the stones were 10 to 20 mm in diameter. They fell for about two minutes, then stopped briefly. A roaring sound was heard from the south-west as the main surge of hail approached. The roaring was the sound of large hailstones hitting nearby roofs. Then the huge hailstones started falling. They made a deafening sound on roofs, and as they hit roads and hard surfaces they bounced several metres back into the sky. The wind started gusting from the south-west which was devastating for thousands of south and west facing windows - the sound of breaking glass accompanied the roaring of the hail. Then at 3.30pm it was all over. The black cloud rumbled its way to the north-east as residents cautiously came out to survey the damage.

The scene that faced them was one of smashed windows, dented cars with cracked windscreens, stripped gardens, fallen branches, outdoor furniture destroyed, television antennas bent, and everywhere on the ground thousands of golf ball-size chunks of ice. Some hailstones where almost spherical, others jagged and irregular shaped. Diameters of 30 to 50 millimetres were typical in the centre of the city, but in other parts diameters of up 80 mm were measured. Around 60 to 70 per cent of the ground was covered with hailstones, some of which had become partly buried in the ground after hitting with considerable force. In other parts of the city, particularly South Armidale the hail cover was closer to 100 per cent.

As the extent of the damage became apparent, the State Government declared Armidale a disaster zone. State Emergency crews from as far as Coffs Harbour, Dorrigo and Manilla were called in to assist local personnel. Over 1000 tarpaulins were placed on leaking roofs, the children's ward at the hospital was evacuated as water dripped through the ceiling, the historic Newling Building (formerly Armidale Teacher's College) suffered severe damage to windows, skylights and slate roof, and aircraft at the airport sustained damage. Although the whole city was affected, parts of South and East Armidale received the greatest damage.

It was later established that about 80 per cent of buildings in the city had suffered damage, and in excess of 3000 vehicles had been dented, many with cracked windscreens. The total cost was estimated to be close to 200 million dollars.

Armidale was extremely unlucky with this storm - the biggest hailstones fell only on the city itself while nearby areas received little or no hail. Armidale averages 56 thunderstorms per year with only seven per cent of these producing hail of any size. In the last 25 years there have been only three other severe storms with damaging hail - one in 1975 and two in 1994, but these were minor compared to the 1996 storm.

It was considered to be a "one in one hundred years event", and will certainly remain in the minds of Armidalians for a long time to come. By the way, who did win the Rugby League Grand Final that day?

Click on the image for a larger view of the hailstorm clearing to the northeast of Armidale. 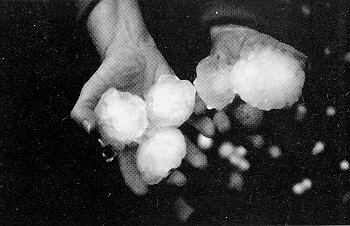 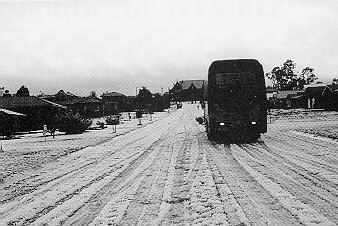